Working from home has its challenges. And these days, it has become a necessity that many people have to deal with. At Random Dragon, however, it’s actually not a new thing.

We have been working as a distributed team for over two years, both alongside in-house teams and as a fully virtual team. As consultants and as contractors, where we don’t have the opportunity to work together every day.

We count ourselves lucky these days, while the world is in isolation, and industries and teams, that are used to seeing each other every day, working, walking and talking together, lose that daily subtle social interaction, that builds culture and team spirit.

It’s true; you can lose that social interaction with your colleagues. The water cooler conversations and the inside jokes, that build culture, but there are ways to get that virtually as well.

Over the years of working together virtually at Random Dragon, we have learned to find other ways of handling the random social interactions. We have set up chat rooms, where random comments are appreciated, and links to news or interesting articles are encouraged.

We have set up Voice Chat channels you can join and talk while you work. And we play games online and have fun together without being in the same room.

One of the teams we worked with even had a dedicated Meme group, where they would share memes.

This doesn’t replace being in the same room, but it can help distributed members of an analog team, be a part of the inside jokes and culture.

These days, something small like that can help bring everyone together.

Now teams don’t just have one distributed member, the whole team is distributed, so everyone is on common ground, which only makes it better.

As programmers, we sometimes work in pairs to get the best result. Pair programming doesn’t have a barrier, when it comes to virtual teamwork. Screen sharing while voice chatting is easy, and you don’t have to be close enough to smell the other person while doing it.

Video chatting is the next best thing to actually being in the same room, but it isn’t always necessary. In the above case, where two people are working together, a voice chat can work just as well, if not better, since you’re not trying to decode a person’s expression through a pixelated image.

After our morning meetings, we sometimes just leave the voice chat on, not to speak constantly but to be able to just ask or talk. That way, we are not waiting for an answer to arrive, whenever the other person checks their messages on slack, but we are actually working together, even when apart. We go offline when we want to be more focused on our work and are not up for conversations.

Additionally, we would set up voice chats that are specific by subject;

A chat for art discussions, a chat for programming talks etc.

That way, if you want to discuss the subject, you can just join the chat.

And in the case of coaching or specific meetings, you can still do specific voice / video calls instead, so you dont disturb the others in the team and they dont disturb you.

Document everything. Write down what you agree on in the voice and video chats, put it in the correct Slack channel.

When we have someone working on a different assignment than the rest of the team, they can feel isolated, so letting them read up on what is going on while they are away means they don’t feel like they are missing out.

As a small company, we have relied mainly on free solutions for our technical needs.

Using Trello to manage our sprints and tasks, using Slack for text chat and Google Drive for our documents, among others. All of which can be extended to suit your team’s needs.

Random Dragon is an agile team and, as such, we work in sprints.

One of the great things about a sprint board is moving the task to done, and by doing it – showing to everyone that you’ve completed the task, giving a feeling of pride.

The way we allow for that, is using an extension for Slack, which posts in a specific channel, whenever a task is moved in our Trello sprint board. Additionally, we’ve set up a bot to post in another chat, whenever a code is pushed, and there are several other integrations, that can work with your team’s specific flow. 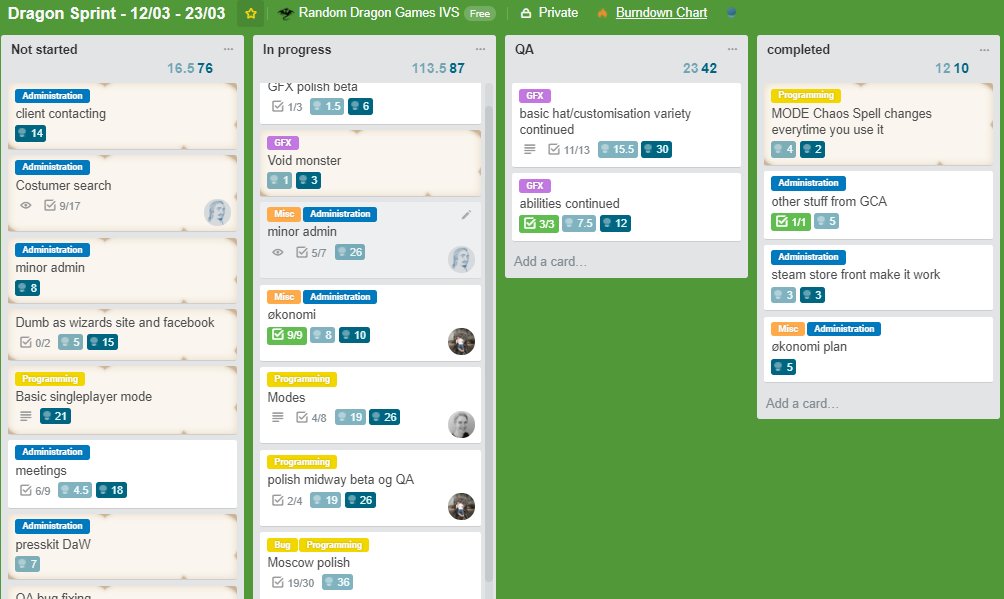 Using tools that allow for synchronized workflow, working with Google Drive tools is invaluable for us, since we can rely on the synchronization being instant, again, a Slack integration lets us know, if someone has commented on something we wrote.

Extensions like Trelables and Scrum for Trello, lets us mark each task’s estimate, and both colour code and name the type of task it is, when planning.

When the sprint is over, we can move the completed tasks to a pile of done tasks as a new list and see, if the overall estimate holds up. This is something that can actually add value, that wouldn’t otherwise be as readily available, when using a purely analog solution.

There are lots of tools out there, that can help you facilitate a good process and good virtual teamwork. We have chosen simple solutions, and added what we needed, to make the tools work for us, the way we want them.

At Random Dragon we are gamers. That gives us easy access to social interaction, even when isolated. We play games together regularly and set aside time for researching games together every week. Not all games are created equal, when it comes to being sociable, though, so when choosing this route, I suggest picking games, where players work together. An added benefit of this is the added teamwork, and stronger bond, you get from overcoming a challenge together.

You don’t have to play together, though. Nothing is stopping you from simply setting up conference calls and having beer together after work.

An inspiration on our work as a distributed team has been Ian Wang and his GDC talk from 2016
https://www.youtube.com/watch?v=ZopWgi_qFpM